Synonymous with travelling through New Zealand, being young, wild and free, or a grey nomad, is hiring a campervan. It’s an all encompassing experience as it enables you to a) get around, b) have somewhere to sleep and c) feel really free-spirited. On planning our trip to New Zealand, my partner and I decided it would be worth trying, at least to satisfy our curiosity if nothing else. Having never done ‘campervanning’ before, we opted for the baby-steps option, which was four nights.

A few friends had told us, “Oh it’s so great, there’s this thing called freedom camping, you just pull up your campervan wherever you please and stay the night!” A bit of research told me this was not exactly the case. There are places where you can freedom camp, though it’s not as simple as pulling up in a carpark in the middle of town. Throughout our travels, we lost count of how many signs we saw which read “Strictly No Freedom Camping”. Majority of the places you can safely camp are Holiday Parks or Department of Conservation (DOC) campsites.

As for the logistics, we picked up our Britz Action Pod from Christchurch and 4 nights later we dropped it off in Queenstown. This cost around $800 NZD, which included a $200 NZD ‘one way fee’, a fee for dropping the campvervan off in a different city to where it was picked up. We chose to include a first aid kit, Wi-Fi hotspotting, some camping chairs and insurance, which also bumped up the price a little. Funnily enough, I just watched an episode of Broad City (Season 1) where Lincoln gets into an argument about types of insurance that come with a hire car. He opted for every type of insurance there was, and none of them covered the flat tyre he got while driving the car. Apparently he had to request ‘flat tyre insurance’, whatever that is. Anyway, there are different insurance options with Britz and they are easier to understand than the ones Lincoln chose.

Back to our experience. On our first night in our Action Pod, we stayed at White Horse Hill Campground, in Mt Cook National Park. It cost $12 NZD per adult, per night to stay. There was a sheltered area where we filled out a form (out of honesty) and placed it into a box with the right amount of cash (Tip: Bring Cash). This camp site was basically a giant car park, with a sheltered communal area, some unisex toilets and a tap which provided drinking water. There were some cars parked when we arrived, presumably to do some day walks, but it was mostly filled with campervans.

Now, this is where our slight hiccup begins on our campervan journey. When we arrived at Mt Cook National Park it was clear blue skies and a moderate temperature. See evidence below:

It was definitely jumper and beanie weather but nothing too extreme. We did a short walk to wet the appetite for some bigger walks the next day, all while soaking up the fresh air and panoramic views. Once settled in, we used the gas stove at the back of the campervan to cook ourselves some pasta, feeling super outdoorsy and rugged of course. 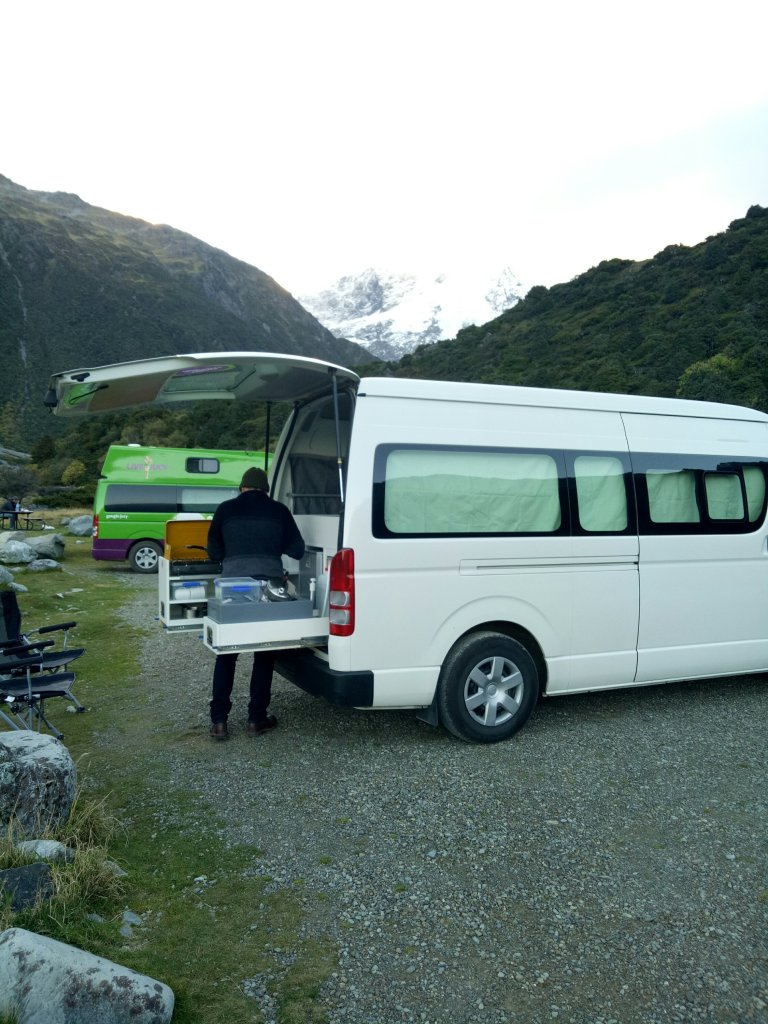 Then, a couple of hours after going to bed, the most ferocious thunderstorm rolled through the national park. It rained. Non. Stop. The rain was loud, heavy, pelting, cats-and-dogs. Whatever adjective resonates with you, it was intense. The campervan rocked from side to side and there were some moments when we thought it might topple over if the wind gust allowed it.

We basically didn’t sleep and as soon as we ‘woke up’ we were outta there! As we drove out of the National Park, it continued to rain and the skies were as grey as can be, see evidence below:

It felt bizarre that it was so bright and sunny only the day before. I guess that’s the weather for you. We arrived in Wanaka a day earlier than planned and ended up having 3 nights in a holiday park with showers, toilets and a kitchen. We had much better sleeps over the next few nights, though it did get quite chilly on the last night because there was no cloud cover. It was either listen to the rain, or be cold. Nonetheless, we managed and enjoyed all the activities that Wanaka had to offer.

Would I hire a campervan again? Absolutely, but probably when the weather is a little warmer and not as wet. The only hassle about having the campervan was trying to find an appropriate park when we needed to drive somewhere. I would have loved to have the proper experience of camping in a National Park with minimal facilities, though we have done that in a tent before. I thought Britz were a good company to hire from, and we had no issues at any point in the process.

While things didn’t go quite to plan, our first experience in a campervan was enjoyable and gave us the opportunity to enjoy New Zealand from a different perspective.